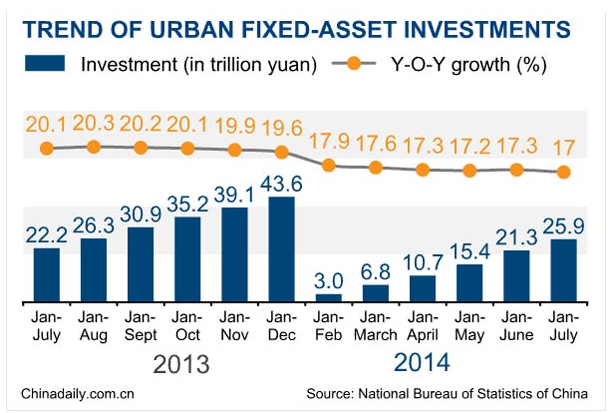 The growth pace retreated 0.3 percentage point from the rate seen during the Jan-June period, according to the NBS, which attributed the slowdown to cooling investment in the property sector, weak manufacturing investment in oversupplied sectors, as well as slowing local fiscal revenue, which has restrained investment.

Earlier official data showed China's home prices continued a downward trend in more cities in June, with the average price in 70 cities slipping 0.47 percent from the previous month, marking a second consecutive monthly drop following a 0.15-percent fall in May.

Given the sluggish property market, which could complicate the broader economy, Chinese policymakers have pinned hopes on accelerating investment on railways and infrastructure, speeding up fiscal spending, and selectively easing monetary policies to offset the impact and support growth.

In the first seven months, investments on infrastructure (excluding the power industry) rose 25 percent to 4.21 trillion yuan, with those in railway transportation up 19.6 percent, increasing 5.4 percentage points from the pace seen in the Jan-June period.

Investment in the primary industry went up 25.1 percent, followed by a 19.2-percent rise in the tertiary industry and 13.9-percent in secondary.

After getting off to a weak start, China's economic growth quickened to 7.5 percent between April and June on an annual basis, up from a 7.4-percent pace in the first quarter.