1 million Chinese visitors expected at World Expo, which will feature three pavilions from their country

Italy will feel the growing clout of China during the Milan World Expo 2015 as it welcomes a large number of Chinese visitors, as well as Chinese companies and cultural representatives looking to continue the success of the record-setting Expo Shanghai 2010.

"We have set an ambitious goal of attracting and welcoming 1 million Chinese. We are on track to meet our goal," says Giuseppe Sala, commissioner general of the Italian government for the six-month event. 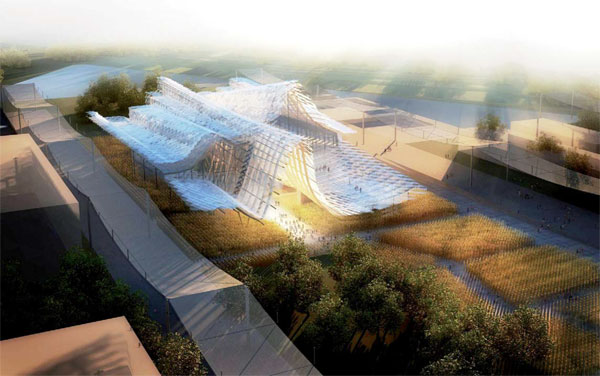 The design of China pavilion at the Milan World Expo 2015. Provided to China Daily

"We are working directly with major tour operators in China and, to date, a total of 650,000 tickets have been sold. The level of interest is impressive. I am very pleased with this important result that brings us closer to our goal."

Sala spoke at length with China Daily about the event, planned for May 1 to Oct 31, 2015. He notes that the Italian government has dropped visa waiting periods "from 21 days to 3 to 5 days on average" for Chinese visitors.

Italy is hoping that the Milan Expo will breathe new life into its still-troubled economy, and that it will prove to be a transformational opportunity for its population.

Projected attendance is 20 million, and some 145 countries have confirmed their participation. China is expected to have the second-largest pavilion after Germany and will be the only country with a total of three pavilions, including two corporate entries.

"In this, Chinese tourism will weigh a lot," Sala says. "We are counting on Chinese media coverage, which is extremely important for us."

The Chinese public will get a taste of the Milan Expo in September, when event organizers and tour operators launch a promotional tour across China, Sala says.

"Our road show will be a series of meetings across seven different provinces. Meeting people face-to-face is a unique opportunity to get them involved in your event." Organizers say while plans are being finalized, the trip will include Guangdong and Hebei provinces.

The pavilion is a floating cloud structure that offers a distinctive undulating roof that uses a timber frame referencing a raised-beam system found in traditional Chinese architecture, according to the Designboom architectural website.

"China's pavilion represents the power and strength of the country. With its undulating forms, Western visitors' impression of the Chinese pavilion will be of something of great beauty and harmony, evocative of the country," Sala says.

"China will be an extremely successful participant at Milan Expo, offering a strategic opportunity to learn more about the huge country's culture and contribution to the great challenge of sustainable development for future generations."

Sala says organizers are putting together an eco-friendly event and all pavilions are made of materials that can be dismantled and reused, leaving a large park at the site.

Besides China's official pavilion, there will also be two corporate entries, including the Vanke Pavilion created for China's leading real estate multinational by Polish design star Daniel Libeskind. He has created a twisted, serpent-like structure clad in a self-cleaning, air purifying, metallized tile, and as part of the pavilion he has reimagined a shitang dining hall, a traditional part of Chinese society.

For the third entry, Chinese corporations have come together for the first time to create a Universal Exposition pavilion, the China Corporate United Pavilion, under the banner "Seeds of China". Structural steel is being provided by Shanghai-based Baosteel Group Corporation, and other participants include Shanghai-based down clothing label Bosideng International Holdings Ltd and Holike Creative Home Furnishing Co Ltd, a furniture manufacturer based in Guangzhou.

The corporate pavilion is inspired by the image of power that arises from the breaking of ground to the sprouting of seeds. The space that contains the auditorium is transformed into the spiral of a DNA chain tracing an upward path, to then take on an elliptical form in a terrace and gardens.

Hybrid super rice, developed by Chinese scientist Yuan Longping, is going to showcased at the expo. The rice cluster is one of the agricultural exhibition areas, inside the expo, not linked to any specific pavilion.
Sala says of Yuan: "I have great pleasure inviting him to be our keynote speaker and guest of honor at one or more events, given the great imprint his work has left on the research and achievements of rice."

Sala says the event also will provide a valuable chance for cultural and business exchanges.

"We are expecting the arrival of seven Chinese culinary schools, so our agro-food companies will also have many opportunities for making contacts and developing relationships. Some of the most renowned Italian chefs will be working with us. Expo Milano will forge and further develop the already strong relations existing between China and Italy."

Sala says he is excited as Italy prepares to welcome more foreign guests than ever.

"Traveling in Italy is something special due to its warm, generous people," Sala says. He also hopes that Chinese tourists will visit Italy's lesser-known destinations that are equally special, unique spots that promise unspoiled scenery.

"We are working with the Ministry of Tourism to offer packages that will also include these kinds of destinations. Even our own area on the outskirts of Milan contains many wonderful places, such as the Royal Villa at Monza, which will host many events for the occasion."

Other such lesser-known gems not far from Milan include Bergamo, the city that gave birth to opera composer Gaetano Donizetti. Bergamo is divided into the upper part of the city known as Citta Alta and the lower part of the city, the Citta Bassa. The upper part is the old city and one of North Italy's hidden jewels, dating back to around 49 BC. Another nearby place worth discovering is Mantua, with an immense artistic heritage of ancient churches, palazzi or palaces, courtyards and sumptuous galleries.

The expo should accelerate a trend that already is gaining steam. Chinese tourism in Italy is growing, Sala says.

"The Chinese would like to know more about Italians, which can already be gleaned from the taste of its cuisine, its works of art and the language of music, opera. For example, La Scala Theatre will feature a special season exclusively dedicated to Italian opera, which the Chinese are really fond of."